How to Play Euchre Card Game 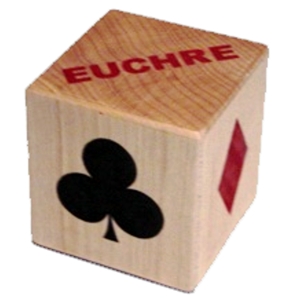 Euchre is a FUN and fast paced trump card game that is pretty easy to learn and play while socializing. Use the steps below to learn the basics of how to play Euchre and give it a try with your friends or family. Leave a comment and let us know how you like it!

The card deck for the Euchre card game is a standard poker deck with the 2's through 8's removed. So for Euchre you use the 9's through Ace's for each of the four suits: Clubs, Spades, Hearts and Diamonds for a total of 24 cards. Four players are seated at the table with partners across from each other.

The top card of the pile is offered to players as possible trump in clockwise order. Players guess how many tricks they can take based on the ranks of the cards they hold. If a player chooses not to name trump, he says "pass" and the decision then goes on to the next player to his left. If a player chooses to name that suit as trump, he says "pick it up". The dealer picks up the card and discards one from his hand face down. Players name trump if they believe their team can take at least three tricks using that suit as trump. Typically it is said that players should count on their partner for one trick. If no player calls up the trump card on the first time around, the dealer turns it face down and the opportunity to name one of the other three suits as trump is passed clockwise around the table.

It is possible for one player to have enough trump and high-value cards to take all five tricks without help. In this case, the player calls trump and announces that he is "going alone". His partner does not play during this hand. If trump is not named, the cards may be collected and dealt by the next player to the left of the dealer. If you are playing "stick the dealer", the dealer must call trump so the hand will be played.

Starting with the player on the dealer's left, each player lays down one card. All players must follow suit, if possible, and are not required to play trump unless trump was led. The highest-ranking card wins the trick. The trump suit beats all others. The trick is collected by the winning team and the player who won the last trick leads the next. Play for that hand continues until all 5 cards have been played. Then the deal continues to the next player clockwise around the table.

It is sometimes difficult for beginners to recognize The Left Bower as a trump card because it simply doesn't look like one. So new players will sometimes play it incorrectly. As a new player, pay special attention to the left bower and organize it in your hand with the cards that are the trump suit.

Here are some things to pay attention to as you learn Euchre:

1.) Whenever a Jack is led by anyone, take note of it's color. If it is the same color as trump, it is also trump. If you have any trump in you hand, you must follow suit and play trump. Example; Spades are trump, the Jack of Clubs is lead. You must play a Spade.

2.) If a trump card is led and you hold a Jack, check it's color. If it is the same color as trump, it is the Left Bower. If it is the only trump you have, you must play it.

3.) Assuming Diamonds are trump in this example; If a Heart is led and the only red card in your hand is the Jack of Hearts, you should know that you are not required to  play it because it is now considered a Diamond. The Jack is the Left Bower and you are only required to play it when a Diamond is lead. It's your option to play it, but only if you want to.


Euchre is a FUN card game!  Once you learn the basics of the Euchre card game, with practice you will get more familiar with the "strategy" involved. One site to practice on is https://www.aol.com/games/play/masque-publishing/euchre. You can choose "Single Player" to play with the computer or "Multiplayer" to play with other live players.

You may also be interested in:
What is Euchre?
General Euchre Rules
Three-Handed Euchre
Bid Euchre - Pepper
History of Euchre